In December/January I spent two weeks in Iceland. It was my fifth trip to Iceland and my second winter trip. Contrary to my last winter experience together with Philippe in 2014, where we had lots of sunshine and mild temperatures, this time the weather was really extreme.

The temperature changed within a day from -12° to +3°C and back to -10°C. The roads were very often covered with a thick ice crust, polished by the wind. When it rained on this ice crust I experienced the most slippery roads in my life. Without studded tires and 4WD (which my rental car luckily had both) some of the roads would have been completely undrivable. On one day while driving on an ice-covered road a strong wind gust suddenly moved my car about 2m to the side of the road despite having studded tires and steering in the other direction.

When I was driving from Snæfellsnes to Akureyri the wind was again very strong. At a mountain pass at the Öxnadalsheiði, the road was partly covered by deep snow due to snowdrift. I decided to turn around because the risk of getting stuck was too high. On the way back I found another car that was already completely stuck in the snow. In the other car was a French couple. Since they were on their way from New York back to France and just wanted to do a short three-day stopover in Iceland they were not prepared for this kind of weather. They neither had warm clothes nor sleeping bags and not much fuel left in their car. Therefore we decided to stay together and call for help.

About three hours later a mountain rescue team with two monster trucks with 46″  tires arrived. Since the road was in the meantime covered by one-meter deep snow it was impossible to get our cars to Akureyri. We had to leave them at the mountain pass and were brought by the monster trucks to a hotel in Akureyri. With their huge tires and extremely low tire pressure of 0.5 bar they could drive above the deep snow. About six hours later, in the middle of the night, the police called our hotel and told us that the snowplows will soon have cleaned the road and we could pick up our cars. By the way, this was not a small side road this was the ring road no. 1, the main road in Iceland.

On another day all roads in eastern Iceland were completely closed for 24 hours due to a snowstorm. On the south coast, I had wind gusts of more than 120 km/h. The hotel owners recommended not to leave the hotel at all but I decided to try to get to the next location. The wind on that day was really extreme. If you tried to get out of the car, first you couldn’t open the door due to wind pressure. Then, when you finally managed to get out of the car, the storm just pushed you over if you had nothing to hold on. In one place the wind was so strong that I was even slightly afraid that the car could flip over.

During the whole trip, nearly every trail was extremely slippery due to ice-covered rocks. Luckily I had my crampons with me and put them on whenever I left my car. After the first days, I even stored them in the pouch of the driver’s door because the risk of getting hurt while walking from the driver’s seat to the trunk to get the crampons was too high. If you plan to visit Iceland in winter some lightweight crampons are a must in my opinion.

As you can imagine photography under these conditions is also not easy. My front lens was always covered by ice or snow. I brought about a dozen microfiber cloths to Iceland for lens cleaning and used them up in the first few days. I had to buy some additional ones in Akureyri (for a horrendous price). In addition, I got some serious frostbite on my fingertips from the short moments where I had to remove my glove for example to change filters.

What didn’t work out was getting good images of northern lights (aurora borealis) since besides two nights it was cloudy every day. I had also booked three ice cave tours in advance (with localguide.is, a very competent, experienced, and friendly tour operator which I can really recommend). Sadly, due to the heavy storm, two of the three tours were canceled.

This was my itinerary on this trip: 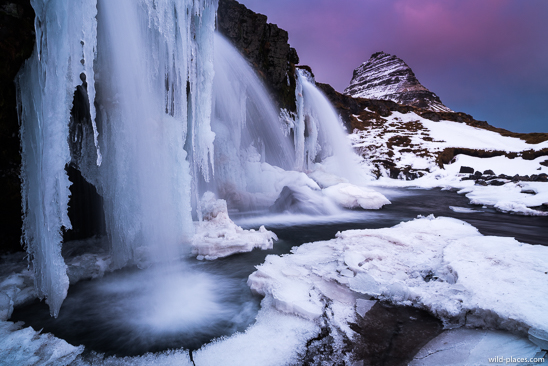 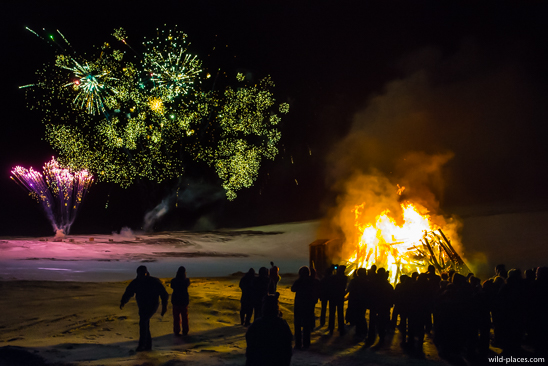 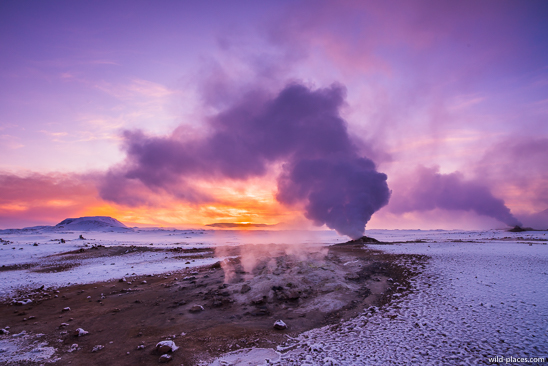 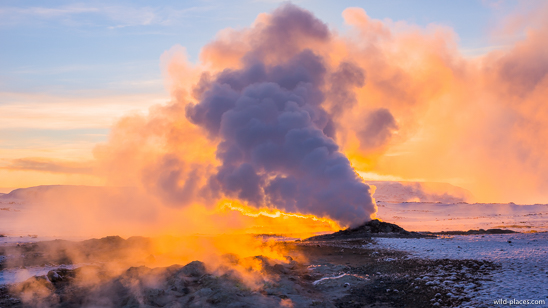 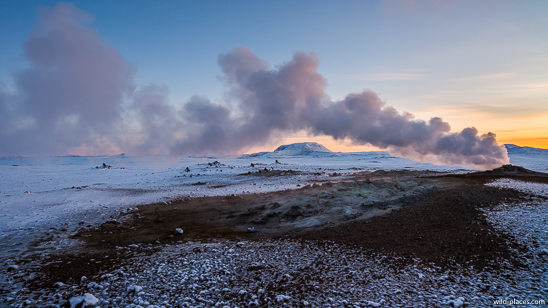 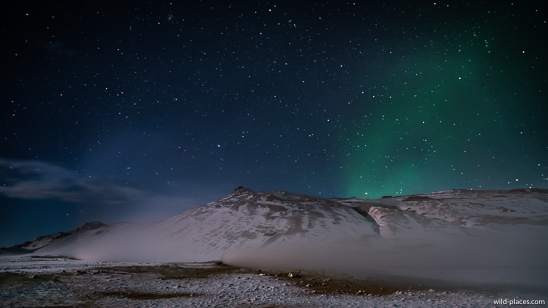 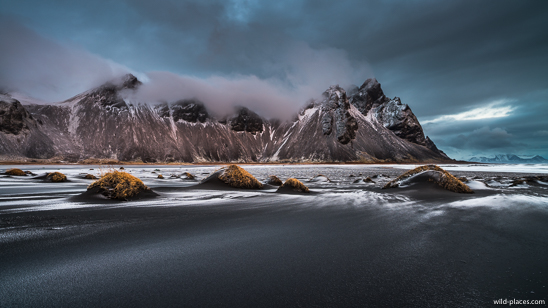 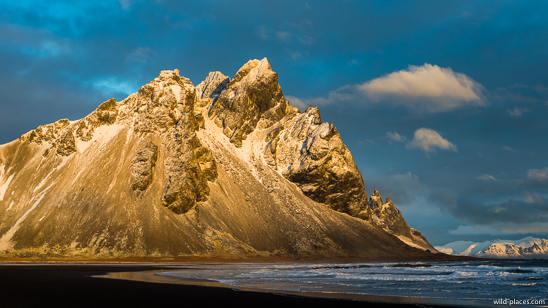 Ice Caves at the Vatnajökull 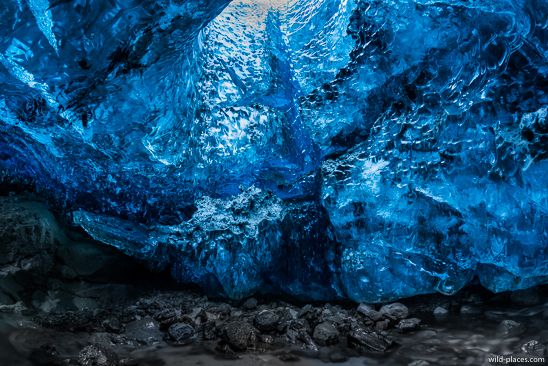 In addition, a friend reminded me, that images of Icelandic horses are still missing in my gallery. She’s right and therefore I stopped several times whenever I saw some horses with a nice background. Since most of the day it was rather dark and horses are rarely standing completely still most of the images were unusable due to motion blur or a wrong focus point. But at Stokksness I was lucky. Some lovely and curious horses, a beautiful background, and great light came together.

This won’t be my last trip to Iceland, the next one is already planned and booked. After this next trip, I will publish a book about Iceland with my best images. If everything works out as planned it should be available as a print-on-demand book end of this year.

But it was the last trip with my current Nikon equipment. I took two D800E bodies, the Sigma 15mm fisheye (only used in the ice cave), the Zeiss 15mm ZF.2, the Zeiss 21mm ZF.2, and the Zeiss Planar 50mm ZF.2 to Iceland. The Otus 55 stayed at home since I thought that I would very rarely use 50mm focal length and wanted to reduce the weight. I will now sell my Nikon bodies and most of my lenses and get the Sony Alpha 7RII with some Zeiss Loxia lenses.

Since I travel a lot and also do longer hikes my main motivation for the change is to reduce the size and weight of my equipment while maintaining the high IQ of the D800E. In addition, I expect manual focus to be easier and more precise with the A7RII. I had a lot of misfocused images with the D800E in the past especially if you shoot handheld with fast lenses like the Zeiss 135mm Apo. Since both my D800E were extremely reliable I hope that I won’t regret that decision.